The same shield design that was CNC-routed in Prototype V was converted to Gerber files and sent to a PCB house: 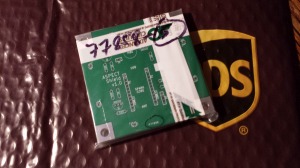 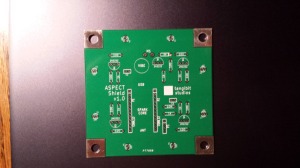 The wood slab were modified to reduce milling time by simplifying the designs:

In addition, a 45 degree bevel was routed (in a separate operation from the CNC milling) on the top edges of both the Cap and Base slabs. The bevel width was adjusted to 0.25″, keeping to preferred dimensions.

Here is a comparison with between Prototype V (left) and Prototype VI (right), both fabricated in red oak and finished with Tung oil: 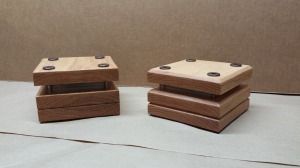 The beveled edges improve the overall aesthetics of the design by softening the hard edges, making the top Cap more inviting to touch.

Here’s a close up (using the original Lightguide slabs): 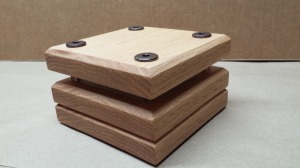 Here is a bottom view with an un-assembled PCB (rubber feet have not been installed): 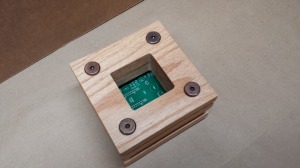 Components, including a socket for the Spark Core, were mounted. Here is the first board assembled: 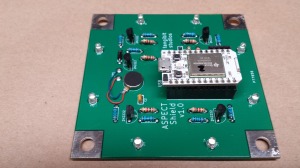 The previous Prototype V code was used to test the board, which worked as assembled.

No videos were made.